I want to explain why despite the effort, it seems like a person with ADHD might struggle to get things finished and how we can support them.

People still think ADHD isn’t a real thing or a ‘naughty boy’ invention.  Or an excuse for bad behaviour.  Or something that children grow out of.  Or something that will be solved by good discipline.  And to be honest, most children I have come across with ADHD diagnosis are boys.  And they are noticed by their behaviour, often labelled as ‘a nightmare’ from a young age, and often seen as the one child no one wants in their class.

But would you want to teach a girl who works hard to be the teacher’s pet?  Who is top of the class, (well when she tries), and always is polite, keeps the rules and seems a bit shy and daydreamy at times?  Would you even consider or believe she had ADHD?

Are these presentations the same thing? – well yes, both are what ADHD might look like on the outside.  You can have kids with ADHD who are boisterous, chaotic and oppositional, and you can have those that act like the teacher’s pet, even if they are a bit ditzy…okay, a lot ditzy at times.  Inside the brain there are similar things happening.  There’s too much attention – the world is detailed, busy and distracting.  There’s not enough concentration to get through anything that is remotely boring, because the brain doesn’t have enough dopamine to get through it.  ADHD is an hyperactive brain, and in some the hyperactivity plays out in the body, into constant physical movement. In others it can be in hidden movements and tiny fidgets that no-one would notice.  That hyperactivity might be hiding away in their busy brain, creating fantasy lands in that amazing imagination, where you can run, have adventures and be the one to solve all the problems because you think so differently to anyone else.

Because the reality for kids with ADHD is that often the demands in front of them are harder for them than anyone else. I have noticed different approaches to the challenge of having to sit still, focus and complete often very boring tasks in ADHD children.   It is so easy to lose interest and focus, especially with all the distractions of other people, the environment and sensory things that catch your attention.

First there are those who just have to move.  And they have been told off so many times that they have lost the will to even try any more. The statement in an ADDItude article that said “by the time they are 12, many ADHD children have heard 20,000 more negative comments about themselves than other children” says it all.  All that negativity can easily become a self-fulfilling prophecy that the child believes about themselves.  I am bad, mad, broken and useless.  So why bother – I might as well be what they are saying I am.

Secondly there are those that daydream it away.  Often the girls, but there will be boys that do this too.  The world is too boring and demanding that you sit still, shut up and focus.  It is much easier and exciting to live in your imagination.  Some children are called liars when these stories spill out into their conversations. When they tell you their tales that are as real to them as your boring daily life. Many children with ADHD have rejection sensitivity.  As an adult I can tell you it is a disabling fear of any kind of criticism or even correction.  I have learned how much of a people pleaser it has made me, and although I do think that isn’t all bad, (I think I have a great empathy and love for people because of it)  it does leave you vulnerable to overload, exploitation and mental exhaustion.

I tried to pay attention in school and tried to make sure I sat at the front of my classes to help me be less distracted. (Although I could have written hundreds of novels with the stories I ended up daydreaming about).   I tried to do all my homework (when I asked my mum about my childhood, she said I always seemed to be doing school work – she thought I was just very studious, she didn’t realised it took me forever to try and do my work).  I tried to have friends (and always felt awkward and on the outside of the group) and I tried to concentrate in my exams (and only fulfilled my potential in those we had done course work in).

Whether you are supporting an ADHD child who is moving all the time, distracting others and being distracted (driving you to distraction!) or whether you are aware of a quiet, studious child who seems in a daydream and never seems to fulfil their potential (lots of unfinished work, for example) … My plea to you is to know that ADHD children have to TRY more than most other children and all they often get is criticism, sanctions (such as stay in to finish something, when they desperately need that break time) and a lot of negative comments,

“Why can’t you just get it finished”,

“you’ll never amount to anything if you can’t ….”

So let’s flip this on its head.  How about changing the narrative here.  How about we start looking for things to PRAISE the ADHD child for, especially for any effort they make.  When your brain doesn’t focus the same as other children, then it can be devastating to always only have negative feedback for all the effort you do put in.  And what would make you less inclined to put some effort in than more demands and criticism?

How about we say something positive instead?

One of the things we do know about ADHD now, is that dopamine is lacking in the brain.  This is essential for motivation and feedback in many activities and unless we are aware of this it can be very easy to misunderstand why an ADHD child isn’t doing something you are asking them to do.  As an adult I have been learning about my boredom threshold and how it does all it can to stop me from completing anything.  I’ve taught myself to stimulate the dopamine to help me actually finishing something – by giving myself little rewards when I get something done.   (Sometimes I do a little ‘happy I finished dance’ – I need movement you see!)  Breaking things into smaller chunks and getting positive feedback from my colleagues helps a lot too.   Lots of adults get bored with work tasks, you might say, but with ADHD it is extreme.  I can have this challenge a hundred times a day and I try so hard all the time to overcome it.  I have been lucky (Maybe? At least I wasn’t always in trouble?)  in that I was that teachers pet kind of child.  I was so scared of getting into trouble (rejection sensitivity) that I tried so hard to be good.  I tried so hard to do my work.  I tried so hard to revise and concentrate in my exams.  And I was devastated when I didn’t do so well as I should have done.   You see, I worked harder, and longer and tried harder than most other people I know.  And I wish I had known the reason why back then.

It is strange for me to start writing about ADHD but as I do with autistic children, I aim to help those supporting them understand how it is for them and work from what is positive, affirming and enabling.  It’s just with ADHD, I have some personal experience to draw from too!  Even if my husband still calls me “Lynn half a job!”  (For the record he’s good at finishing what I start around the house – that’s team work!) 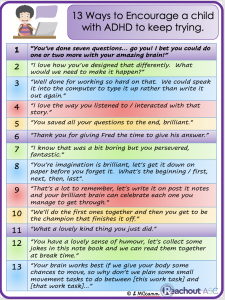 Growing Up, Advice for Autistic Boys
Scroll to top