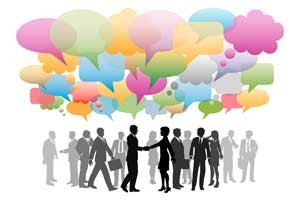 Hilary works with us and is autistic and a maths teacher (amongst her other talents). She has a great way of explaining what being autistic is like and we often talk about the apparent anomaly between her confidence in speaking to someone 1:1 or to a whole group of students, as opposed to being in a group or party situation with lots of people to interact with. I love how she describes it….

Now, there is an easy way to work out the number of interactions for a given number of people.   If there are 3 people then we simply need to multiply 3 by 2 by 1 = 6 This is written as 3! The exclamation mark is known as a factorial sign.    So then one more person joins…now there are 4! Potential interactions which = 4 * 3 * 2 * 1 = 24   This may possibly be about my limit but mostly if I am one of the 4 people, but it’s still a big challenge because now I am feeling all the unspoken undercurrents that 24 potential interactions produces.    Throw into this several different personality types and possible tension between 2 or more of the people and it’s possible to see how a storm can quickly brew of unspoken emotions, thoughts, etc.

However, I generally hang on in there, but know I’ll pay the price with exhaustion and several recovery days where I avoid as much social interaction as possible. (Just a note to add that I do of course sometimes ‘do’ social groups with friends I know well or am comfortable with, as a trusted group of friends makes a huge difference, as does having a focus such as, having a meal with friends, and because I am already familiar with the types of interactions which happen and the whole experience is less exhausting. the better I know people in the group, the easier it is, generally.   I still don’t ‘do’ social events and social groups often though.)

Now, a fifth person comes along, and this basically explodes in my head. 5!   Potential interactions, that is 5*4*3*2*1 = 120  undercurrents which are cross-firing what is actually being said…add in a few looks, glances, smiles, frowns, tones of voice, buttings in, and there you have it,   I’m gone, looking for the kettle and a quiet corner and maybe one person I know well enough to have a nice quiet brew with or better still friends’ cat(s) who totally understand and retreated to quiet corners already.    Add one more person…and now the potential number of interactions rises exponentially… 6!    That’s 6*5*4*3*2*1 = 720 7 people, 7! = 7*720 = 5040 potential interactions.

What generally happens though, is that the limit of a useful group is probably 4, though 3 is in my opinion better still.   At 5, usually the quieter people give way to the more verbal, and melt into the background either gratefully or in some frustration.   So this curbs the actual number of interactions, but not by much due to the unspoken emotions which flow like wifi among the group.   I have come to realise that it must be an acute awareness of these ridiculous number of interactions, with equal awareness of the accompanying undercurrents that make the whole group experience feel to me as if I were being slapped in the face every nanosecond.   The huge difference between a social group of say 5 people and a group which has gathered for a specific focus on say a film or lecture or even in some sense to play some sort of game or sport, is that if there is one focus that the group has then immediately it is in reality a one to one situation â€“ almost, with each person in the group interacting mainly on the focus, and all 5 people also acting as one person interacting with the focus.    Giving a public lecture, teaching or speaking to an audience is in reality a one to one situation, so, poses no threat.    This is why teaching, speaking is no problem, or being taught etc., but groups â€“ where’s the kettle.

How can we help?

Now in a classroom there are often way more than 7 people to interact with!  Often we ask children to work in groups and then expect them to know how to get on with it and work together.  For an autistic child this can be a nightmare. Not only have they the amount of interactions to attend to and switch their attention to, there is often intolerable background noise from other groups and many other sensory demands.

In a school I often suggest that the teacher supports the autistic child to work with just one other person. In a pair, they can be much more successful in sharing ideas and the task to get it completed. You may need to teach or structure the task in a way that each child knows what their role is and what they are expected to do or produce.  Learning to listen to each other and deal with differences of opinion or ideas is a challenge in itself (for both children in the pair). Many secondary children nI work with say that school life would be much better if teachers would let them work in a pair on shared tasks, rather than making them work in a group.  Please consider what Hilary says about groups and the number of interactions when you are planning shared tasks to do in your lessons.  And make sure the person who they work with is someone who will work well with them.  Some children will get better at working in groups that are calm and well structured, others may take all their effort just to work with one other person right through to the end of their school days.

So here for you is a visual about how you can support partner work in your classroom. (Full social story can be downloaded below) 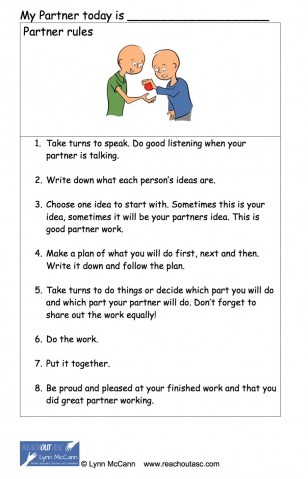 A week in the life – Specialist Autism Teacher
Scroll to top